The Wayne Township Sewer Authority is responsible for maintaining the Township’s sewer infrastructure. Sewer tap ons and flow fees are managed by the Authority.

The Chair of the Wayne Township Sewer Authority Board is Tom Chitwood.

At the August 18, 2008 Township Meeting, Tom Chitwood reported that the Pine Creek Municipal Authority raised sewer rates by 10% and there may be an increase in sewer rates within Wayne Township of between 8% – 10% in the near future.

The Clinton County Solid Waste Authority is giving $1 million to Pine Creek Municipal Authority to pay for improvements to its sewage treatment facility.

The donation will cover the cost of preparing the plant to treat raw leachate – the juices drained from garbage – from the Wayne Township Landfill. Leachate is currently treated at an on-site facility.

“This is a perfect example of a partnership. We’re helping them offset the cost to upgrade so they don’t have to seek that capital from their customers.

The necessary upgrades to treat raw leachate – to be done as part of an agreement with the solid waste authority – will be made at the same time the plant is making other improvements required by Act 537. The act was revised in early 2007 as part of the Chesapeake Bay Initiative, requiring all municipalities within the state to re-evaluate sewage treatment plans and look for ways to reduce nitrogen to the Bay and its watershed area.

The agreement with PCMA requires minimal work to be done on-site at the landfill. The solid waste authority plans to use an existing sewer line that connects to the Pine Creek facility – a move that would only require a minor upgrade in piping on-site.

Alexander said the agreement with PCMA frees the solid waste authority to forgo improvements to its on-site treatment facility, which would have cost “way over a million dollars.”

The decision to financially support the upgrade to the PCMA facility was made at Wednesday night’s solid waste authority meeting. 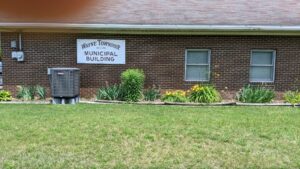